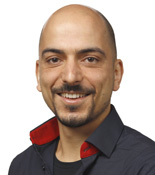 Renato began his career at the Instituto Gulbenkian de Ciência, in Oeiras, Portugal, where he spent four years as a research group member, before joining the institute's bioinformatics support unit. In 2015, Renato moved to Heidelberg and began his PhD studies in the Bork Group at EMBL. The focus of his research was integration of metatranscriptomic and metagenomic data and methods, but he also applied his expertise in Linux system administration and software engineering to develop and support research infrastructure within the lab. During this time, Renato became an active member of the Bio-IT community, joining and leading meetings of the Python User Group, teaching and helping at courses, and providing support for other cluster users on the relevant chat channel.

In January 2020, Renato joined the Gibson Team and began coordinating the Bio-IT Project, alongside Toby Hodges. Renato is working to develop new training and technical resources for the community, ensuring every member of EMBL's computational community can benefit from his experience and expertise. In addition to his core responsibilities for the project, Renato is a Google Summer of Code mentor, Open Life Science mentor and a certified instructor with The Carpentries. When not working on projects at EMBL, Renato enjoys spending time contributing to open source software, learning new programming paradigms and toolkits and exploring the green and blue in Nature.

Renato is available for consulting on computational research and scientific computing topics. Find him at the weekly Bio-IT drop-in sessions, or reach out to him by email or direct message on chat.embl.org.